The cannizzaro reaction is a redox reaction. Two molecules ( aliphatic and aromatic aldehydes ) of an aldehyde are reacted to produce a alcohol and carboxylic acid in the presence of strong base.

a  -   Keto aldehydes give the product of an intramolecular disproportionation in excellent yields.


Nucleophilic addition of OH- to aldehyde. 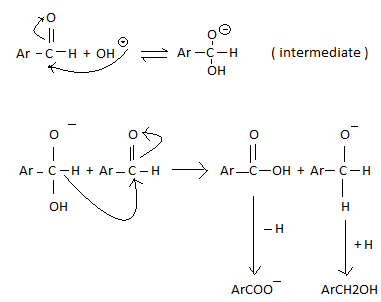 Number of particles of the substance is related to the mass of the substance. Mole is a unit of measurement used in chemistry. A chemical mass unit is defined to be 6.023 × 1023. atoms , molecules , ions or some other units.For Example in chemical equation ,

2H2 + O2 → 2H2O
The above equation implies that 2 mole of dihydrogen and one mole of dioxygen react to give 2 mole of water. The mole may also be used to express the number of atoms , ions, or some other substances. But the concentration of solution is commonly expressed by its molarity , defined as the number of moles of the dissolved substance per litre of solution.

The mole may be defined as the amount of the substance that contains as many specified elementary particles as the no.of atoms in 12g of carbon-12 isotope. (i.e ) one mole of an atom consists of Avogadro number of particles.

Posted by Silviya at 1:33 PM No comments:

Alums are also known that contain selenium in place of sulfur in the sulfate anion making selenate    SeO42-   instead . They Known as selenium or selenate alums. The selenium containing alums are strong oxidizing agents, so they used in antiseptics, among other uses.
Posted by Silviya at 1:21 PM No comments:

Aluminium sulfate is otherwise known as papermaker's alum. However it is not technically an alum. It's properties are quite different from other alums. Most of the industrial flocculation done with alum is aluminium sulfate.
Posted by Silviya at 1:13 PM No comments:

Chrome alum is otherwise known as Chromium alum. Chemical formula is              KCr(SO4)2.12H2O. It is a dark violet crystalline double sulfates of chromium and potassium. The dark violet compound is used in tanning and can be added to other alum to grow lavender or purple crystals.

Posted by Silviya at 5:00 PM No comments:

Ammonium alum is otherwise known as Ammonium aluminium sulfate. Chemical formula is
NH4Al(SO4)2.12H2O. It is a white crystalline double sulfates of aluminium. Ammonium alum finds applications in tanning, dyeing textiles, making textiles flame retardant in the manufacture of porcelin cements and vegetable glues, in water purification and in some deodorants.

Posted by Silviya at 4:53 PM No comments:

Soda alum is otherwise known as sodium aluminium sulfate. Chemical formula is NaAl  (SO4)2.12H2O. It is very soluble in water.And is extremely difficult to purify. It is used in baking powder and as an acidulent in food.

Posted by Silviya at 4:41 PM No comments:

Posted by Silviya at 4:36 PM No comments:

Alums are double sulphate salts. Alum is in reference to potassium alum. It is a compound of hydrated potassium aluminium sulfate with chemical formula KAl(SO4)2.12H2O. Any of the compound with the empriocal formula AB(SO4)2.12H2O.are considered to be alum. A is a monovalent cation such as potassium or ammonium. B is a trivalent metal ion such as aluminium or chromium. Some times alum is seen in its crystalline form, although it is most often sold as a powder.

Posted by Silviya at 4:27 PM No comments:

An alloy of mercury with one or more other metals. Almost all metals can form amalgams with mercury. ( excepting iron  ). Amalgam may be solid or liquid.Silver-mercury amalgam are important in dentistry. Gold-mercury amalgam is used in the extraction of gold from ore.

Posted by Silviya at 4:15 PM No comments: