The structure is shown below. 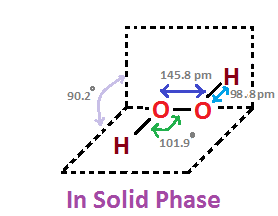 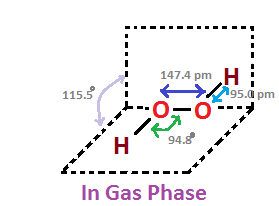 Posted by Silviya at 1:47 PM No comments:

Posted by Silviya at 1:50 PM No comments: 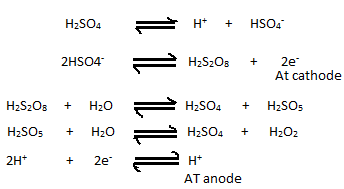 The main source of heavy water is the ordinary water from which it is isolated. Generally it is prepared by prolonged electrolysis or fractional distillation. 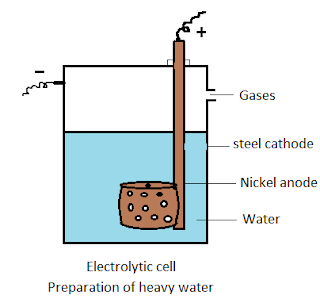 First Stage:
Thirty electrolytic cells are used in this stage. Each cell is filled with 3% of NaOH solution. The electrolysis is carried out at 72-hrs, in the presence of current at 110 volts.The volume is reduced to 1/6 th of original volume taken.That tome hydrogen and oxygen gases are evolved and discarded. The volume left contains about 2.5 % of heavy water.
Second Stage:
In this stage 6 electrolytic cells are used. This stage involves the residue left from the first stage. The gases evolved are burnt and water formed return to the first stage cell. The residual liquids contain 12% of heavy water.
Third Stage:
This stage involve the residue left from the second stage. The gases are burnt and water formed return to the second stage cell. The content of heavy water is raised to about 60%.
Fourth Stage:
This stage involve the residue left from the third stage. The gases are evolved are burnt as usual and sent to third stage cell. Here nearly 99% of heavy water is obtained.
Fifth Stage:
99% of heavy water is made free from alkali and other impurities by distillation. Here the gases evolved are  D2  and   O2  are burnt to get 100% pure heavy water. 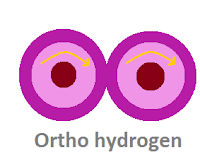 The protons in the nuclei of both H-atom spin in opposite direction is termed as para hydrogen. 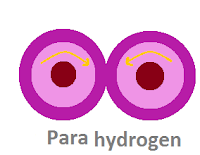 Isotope :
Atoms of elements having the same atomic number with different mass numbers are called Isotopes.
Hydrogen has three naturally occurring isotopes with mass number 1, 2, and 3, each possesing an atomic number of one.


Protium Or Hydrogen
The Structure of protium is given below. 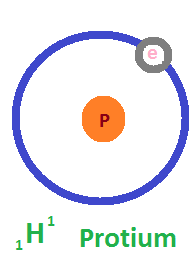 Deuterium Or Heavy water :
The structure of Deuterium is given below. 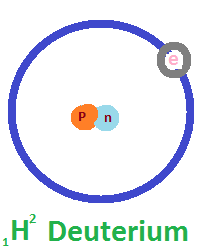 Tritium:
The structure of Tritium is given below. 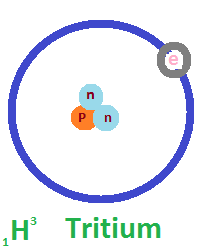 Posted by Silviya at 5:03 PM No comments:

Spin quantum number is fourth set of quantum number. It is indicated the orientation of the intrinsic angular momentum of electron in an atom. It is denoted by  ms . There are only two values for s + ½   and s - ½    . These are also referred to as 'spin up' and 'spin down'. The electron in the atom rotates not only around the nucleus but also around its own axis and two opposite direction of rotation are possible ( clockwise and anticlock wise).

The principal quantum number has the greatest effect on the electron shell or energy level of an atom. It has only positive integer value. It is denoted by 'n'. n can have values 1,2,3,4.. etc. The first level is also known as K level. Second as L level. Third as M level. Forth as N level and so on. The first K level is nearest to the nucleus and next one is second and so on. Principal quantum number is cited first in the set of four quantum numbers associated with an electron.It describe the size of the orbital. It measures the average distance of the electron from the nucleus, 'n' increases the orbital becomes larger and the electron farther from the nucleus.
For example; A hydrogen atom with n=1 the electron is in its ground state if the electron is in the n=2 orbitals , it is an excited state. The total number of orbitals for a given n value is n2.

Posted by Silviya at 9:51 PM No comments:

In this process the ore is washed with some suitable reagent ( solvent ) So the main metal passes into its salt solution. This solution is separated and subjected to further treatment like precipitation. It is then treated further to recover the metal. This is chemical process.
Example :   Aluminium Extraction ;

This method is meant for separating magnetic impurities from non-magnetic ore particles. Example: Pyrolusite, Chromite, and tinstone. In which tinstone is non-magnetic; while impurities ion, manganese and tungstates are magnetic. The powdered ore is dropped on the conveyer belt moving over electromagnetic roller. The magnetic impurities fall from the belt in a heap near the magnet due to attraction. The non-magnetic concentrated ore falls in separate heap away from the magnet, due to the influence of centrifugal force. 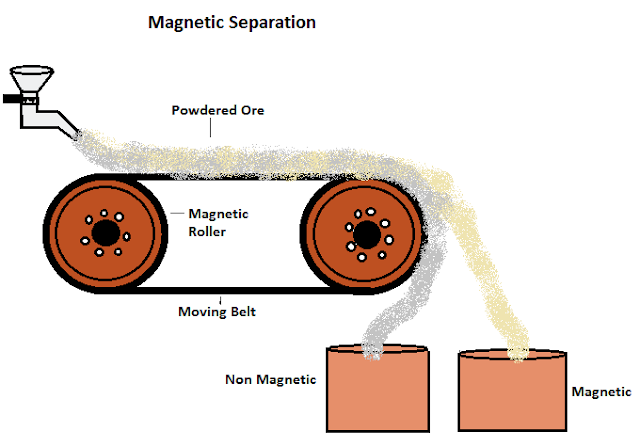 This method is especially suitable for sulphide ores like zinc blende ( ZnS ), and copper pyrites. In this process a mixture of water , pine oil, detergent and powdered ore is taken in a tank. The whole mixture is then stirred vigorously by blowing compressed air. The oil forms a forth (foam) with air. The sulphide ore particles are wetted and rise up along with the forth. ( sulphides are more electronegative so it attracted by covalent oil molecules. The gangue particles wetted by water sink to the bottom of the tank. (The gangue particles are less electronegative so it attracted by water). The forth containing the sulphide ore is skimmed off, collected and allowed to subside, washed and dried to get concentrated ore. The forth flotation process is shown in the following figure. 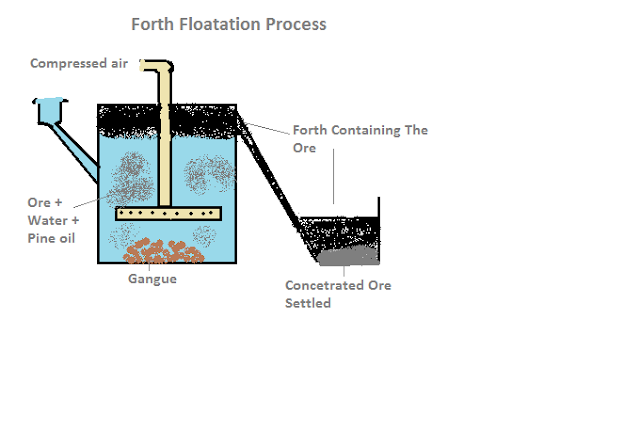 In this method, the powdered ore is placed on a sloping platform and a jet of water is allowed to flow over it. The lighter sandy particles, impurities are washed away, and the denser settles in the groove. This method is especially suitable for heavy oxide ores of haematite, tinstone, ion etc. The gravity separation process is shown in the following figure. 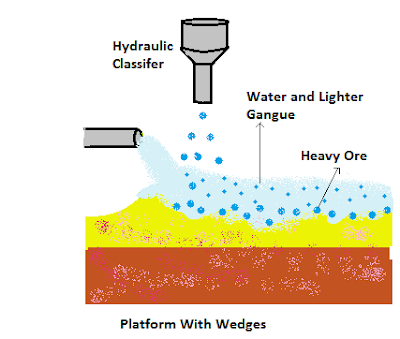 Posted by Silviya at 2:34 PM No comments:

Electronic Concept Of Oxidation And Reduction

Oxidation :
Oxidation is a process in which an atom taking part in chemical reaction loses one or more electrons. Te loss of electrons results in the increase of positive charge ( or ) decrease of negative of the species.
Example :


Reduction :
Reduction is a process in which atom taking part in chemical reaction gains one or more electrons. The gain of electrons results on the decrease of positive charge or increase of negative charge of the species.
Example :

Example of Oxidation-Reduction Reaction : ( Ionic Equation )
The reaction between copper and silver in which copper is oxidized and silver is reduced. The ionic equation for this reaction is,

Oxidation Reaction :
Cu (s) →Cu2+ + 2e-
The above half reaction mention the solid copper is oxidized ( losing electron ) to form a copper ion with plus 2 charge.

Here, two silver ions are reduced to form a solid silver.
When adding the reactions together the electrons are canceled.
Cu (s)  →  Cu2+ + 2e-

Note :
Copper metal is immersed in a solution of silver nitrate. The solution gradually acquires the blue color characteristic of the hydrated Cu2+ while the copper becomes coated with glittering silver crystals. 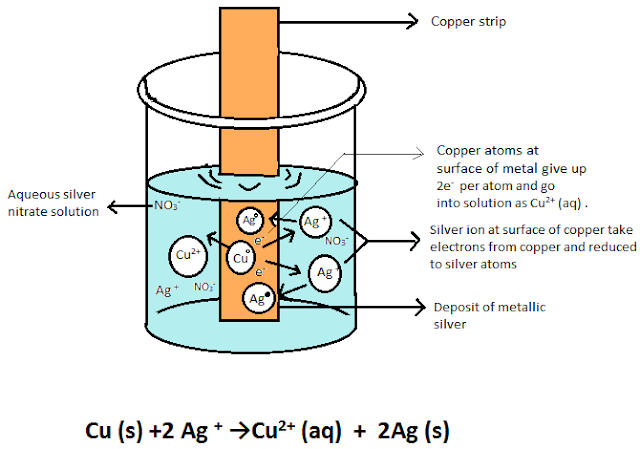 (The above figure is galvanic cell reaction. Its also referred as voltaic cell or Daniel cell.)

The over all reaction may be wrotten as two half reactions