In organic chemistry alkane or paraffin is a saturated hydrocarbon. Alkanes contain only two elements carbon and hydrogen. In alkane all of the carbon-carbon bonds are single bonds. Each carbon atom forms four bonds and each hydrogen atoms form a single bond. Alkane general chemical formula   CnH2n+2 .
Alkanes
Methane :

Paraffins are the saturated hydrocarbons. Main source of paraffins is mineral oil or petroleum. The simplest paraffin is methane CH4. Methane contain one atom of carbon and four atoms of hydrogen. It is a alkane mainly occurs in natural gas. Methane is a product of organic decay in swamps and marshes, the gas obtained by the action of bacteria, this method of formation of natural gas given rise to the name "marsh-gas" for methane.
Structure of methane:

Methane is a tetrahedral molecule with 4 equivalent C - H bonds. The molecular formula of methane is CH4.   SP3  hybridization. 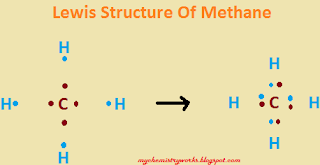