Preparation of lyophobic sols:
Lyophobic sols have to be prepared by special method. These methods fall into two categories.

Dispersion Method:
Large particles of substances are broken, into smaller particles in the presence of dispersion medium . They are stabilized  by adding some suitable stabilizer. There are 4 ways using dispersion method.

1. Mechanical Dispersion:
In this method making a colloid by milling a given solid and the powder produced is dispersed into a given dispersing medium. 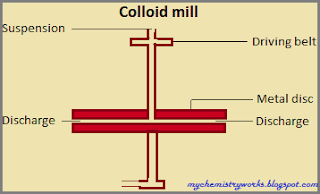 2. Electro-dispersion Method: ( Bredig's arc method )
In this method, two metallic wires functioning as electrodes are immersed into water. Both the end of the wires gives a strong electric current to be evaporated and then it is dispersed into water to form a metallic sol. 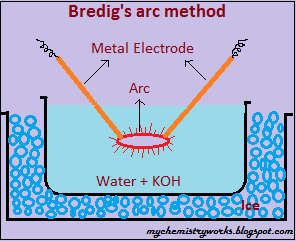 3.Peptisation:
In this method converting a precipitate into a colloidal sol by shaking it with the dispersion medium, in the presence of small amount of electrolyte. The electrolyte used is called as peptizing agent.
Example:
( i ) Ferric hydroxide yields a sol by adding ferric chloride.
Freshly prepared Fe(OH)3 is shaken with aqueous solution of  FeCl3 ( peptising agent ) it adsorbs Fe3+  ions and breaks up into small sized particles of type Fe(OH)3 / Fe3+ .
( ii ) Silver chloride can be converted into a sol by adding hydrochloric acid.

4. Ultra-sonic Dispersion.
The sound waves of high frequency are usually called ultra-sonic waves. Ultrasonic waves are passed through the solution containing large particles are breaks down to form colloidal solution.

Condensation Method:
In this method molecules of the dispersed phase appearing first and aggregate to form colloidal particles.

1. Change Of Physical State:
Colloidal solution of  certain elements such as mercury and sulfur are obtained by passing their vapor through cold water containing a suitable stabilizer such as ammonium salt or citrate.

2. Chemical Methods:
( i ) Double Decomposition:
A sloe steam of hydrogen sulfide gas is passing through cold solution of aresenious oxide to form an arsenic sulfide sol. This is continued till the yellow color of the sol attains maximum intensity.