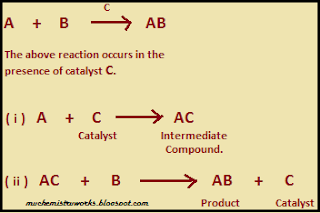 Adsorption Theory:
In general adsorption theory applies to heterogeneous catalytic reactions. The catalyst functions by the adsorption of the reacting molecules on its surface.

( iv ) Release of product:
The product particles are released from the surface.